You Can Start a Kingdom Training Center

Subject: Testimony, your teaching turn me to Christ

Am former Muslim Sheikh, I was searching for the truth for many years, God led me to the internet, I found Gill Ministries material which led me to Christ today am Reaching out to Muslims and Am running House to house fellowships, Using your materials, more Muslim are Coming to Christ, We will need your Prayers and Support.
We name the fellowship after Gill.
Gill Muslims Ministry.

God bless you all.

Click to Read Testimonial
Your teaching turn me to Christ

Its is with the grace, power and mercy of our lord Jesus Christ to email you. My wife and i we got saved after we had been on your website. Your teachings touched our heart and burned us so much. We got to your ministry website for three days checking on the teachings and we could not hold more. We felt like something that prompted us to seek spiritual prayers for our salvation. We later got saved through your website.

We used to come back to your website daily in the evening , read t everything on your ministry website as we prayed much. The lord started to put a burden to us concerning praying for you. My wife and i fasted for 12 days specifically praying for you. Our heart started burning and desired more the word of the lord. We started to sing in our house and pray for some hours every evening. Three days later , our 3 neighbors joined us as we prayed together and they gave their lives to Jesus. In about one month people joined us in our home fellowship. One night when we were praying around 3 am the lord spoke to my wife for us to open a fellowship that will align with your ministry website teachings. We prayed about it in the morning and our heart were at peace.

Its now 6 months only for our fellowship since we started and we have increased to 70 people. My wife and i are emailing you to know that we are birthed from your ministry website and we have been using your teachings all of these time. Please keep praying for us as we are your fellowship in Kenya Africa. Also when the lord releases you to come and visit your church in Kenya.

For Joyce and I, since 1968 when we made a new commitment to our relationship with God, life has never been boring. There have always been new steps, new commitments, or new directions God is asking us to move toward. What we did last year can never be a pattern for what God wants us to do this year.

We like looking back at the challenges and victories of the past, for one reason and that is to raise our faith level for what God is saying now.

In the early 1980’s when I was working with Pastor John Osteen at Lakewood Church in Houston, Texas, the Lord led me to start a Bible school. We had many teachers available, but the most important part was finding the right curriculum. We wanted material that that would build up believers to know they could actually do the works of Jesus.

In the book of Daniel we read, Those who know the Lord their God will do mighty exploits. We needed a course of study that would bring believers into that type of intimate relationship with God.

I visited Spirit-filled schools and I did find one good plan, but they wanted $10,000 for each copy. Lakewood Church had the finances and could pay the money they were asking, but how could that be multiplied out in small churches in the nations of our world?

About the same time I was working on this project, T.L. Osborne came to me. He had signed a contract with a publisher to bring out new editions of his books. He hadn’t realized he was giving away control of his books. He was preparing for another large crusade in Africa and needed thousands of books to give away. He had been printing thousands of them to give away across Africa for many years. But now, for his next crusade, the publisher would be happy to print the books, but the cost for the thousands he gave away was prohibitive. God did enable me as a Christian brother, a mutual friend, as a mediator, to go to the publisher and they get them to release him from the contracts he had signed.

Then, one day as I was praying about the Bible school we were to start at Lakewood Church, the Lord said, “You write the curriculum.”

Wow! Joyce and I felt so inadequate. What could we teach enthusiastic believers that would actually change their lives? What would bring them into a closer relationship with God, even to the point that they would do mighty exploits? What did the apostle Paul teach in Ephesus for two years with the result that all people throughout the province of Asia – both Jews and Greeks – heard the Lord’s message?

During this time, God showed us four important things for a successful training program.

The vision was being fulfilled, through the help of many, courses were being written. Books were being published. Manuals were being translated into other languages.

I came home from a mission trip one year, and had all the symptoms of Malaria. Our grandbabies were just a few months old. Of course I wanted to see them, but was it safe for them? We were believing for a complete manifestation of my healing, but the safety of those beautiful twins came first. Joyce went on the Internet to learn more about Malaria and she found a website posted by a doctor from India. His stated concern was that as travel was becoming more and more common, Malaria was spreading around the world and doctors of other countries needed to be more aware of the symptoms and the treatments that were available. First he gave information for everyone, written so anyone could understand it, and then there was page, after page written for doctors. We were so struck with his concern for people around the world; with the hours he was willing to spend teaching what he knew to other doctors; and my his willingness to do this without any compensation.

The vision for our website changed that day. We saw it as a God-given tool to build up the body of Christ.

Soon after this time, Joyce walked into our shipping area and saw boxes and boxes of books in several languages. She came to a complete stop, and began to thank the Lord for what He had done. As she was thanking God, she heard him ask if we would rather sell a few of these books, in Spanish, French, Russian, or Korean, or give them away free over the Internet and help thousands of people?

Her immediate answer was, “Thousands, Lord, we would rather help thousands.”

Now we look back and see the major teachings God has given us over the years. They have been translated into over 25 languages:

Kingdom Training Centers have been established all over the world. We look around and see how students have become pastors, prophets, teachers, evangelists, and apostles using the transforming power of God’s Word in their lives. We have experienced millions of hits on these files on our website. Many are using these resources for self-study and to establish churches and Kingdom Training Centers.

In the past few weeks (May of 2017) God has spoken to Joyce and I about making the English manuals also available on-line for free download. We asked Him for confirmation that this was from Him as this material has been a strong part of the support of Gill Ministries for many years.

Yes, we have taken another step of faith and have added the English language editions to the other languages of our manuals, audios and video teachings. All of these resources are now available free of charge on our website at www.gillministries.com .

In 1068 God gave us a vision, Equipping Believers around the Word to do the Works of Jesus.

50 years later, we can say that vision has not changed. We felt so inadequate to do what God was saying, and we were, but we stepped out. And then God brought so many along side to help. An engineer who volunteered helping us put together the first notes for the first Bible school at Lakewood Church in Houston, Texas, as we raced to keep ahead of the students. The leader of a large mission organization in the Philippines who took our notes and put them into the powerful teaching format that we are still using today. A Bible school in Hong Kong who took over the translations of the first ten manuals into Chinese. Teachers of the Word who have given us their notes and said if these will help, use them. Others who shared the same vision, who have taken these manuals around the world starting Bible school. We have been given so much by so many. All believers who have had a desire to lift up and help other believers.

Joyce and I are sharing our story, because we hear people all around us sharing their visions today. We hear them asking, “But how?”

We have only one answer, “Step out in faith!” There will be days, weeks, even months when you may feel you are sinking, but keep on believing. Keep on doing what God has said to you. Be faithful in the little things, and let God bring the promotion.

Don’t be concerned about how God is going to do it, just do what He has said to you, and He will bring it to pass. 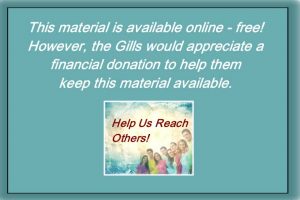